Did you hear about what John Kerry—former SoS—did? He got in front of the press and complained about Trump’s dealings with Iran.

He even claimed that taking out general Soleimani was a tragedy. Give me a break, Kerry.

This was the same man that send billions of dollars in cash to that evil regime. He negotiated the Iran Nuclear Deal—something that everyone in American knew was a terrible idea.

But after his bogus statements, a whistleblower has come forward.

He is releasing fresh evidence that Kerry was quite chummy with one general. 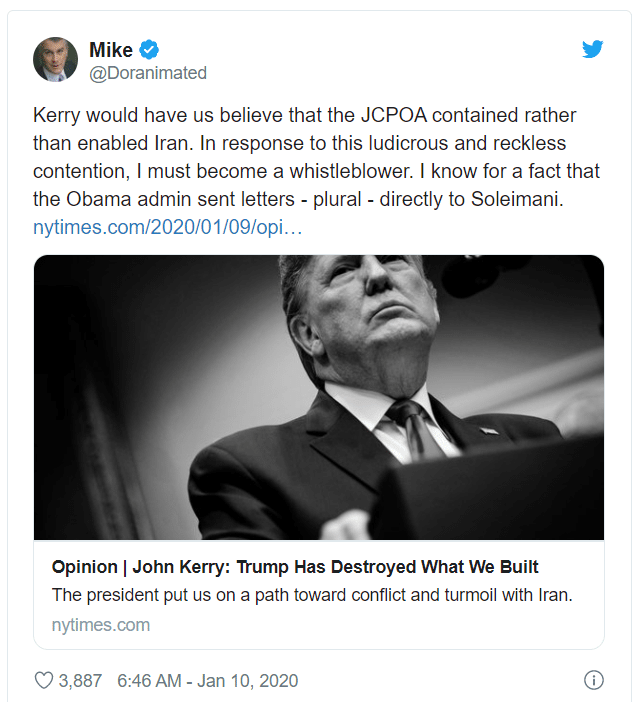 “Kerry would have us believe that the JCPOA contained rather than enabled Iran. In response to this ludicrous and reckless contention, I must become a whistleblower. I know for a fact that the Obama admin sent letters – plural – directly to Soleimani.”

Woah. Michael Doran, a Middle East expert, came out and accused John Kerry and the Obama administration was in contact with Soleimani.

The same Iranian general behind the embassy protest and other “imminent” attacks.

Doran is calling on the media and Congress to declassifying the messages Kerry sent to Soleimani. He even mentions “presidential correspondence” to Iran’s leader Khamenei and Rouhani.

Was Obama chatting with Iranian’s top brass? Was he chummy with an oppressive regime that wiped out innocents and persecuted its own people?

That’s a bombshell right there, if I’ve ever heard one. It would explain why Obama was so eager to send nearly $2 billion to Iran. That money Trump stated was used to acquire the missiles fired on our men and women.

Most people struggled to understand why Obama was so helpful to this rogue regime.

Maybe we’re learning why. His administration, through John Kerry and others, were making deals with one of the worst countries in the world.

Perhaps this explains current liberals’ love of Iran. They are following Obama’s footsteps of bowing to a corrupt foreign power.

Thank goodness Trump is in the White House.

SHARE if you want John Kerry and Obama investigated over this revelation.